Thanks to Law School Transparency and other transparency advocates, we now have significant information about entry-level JD jobs and salaries. LST has also led the way in developing graphics and scorecards for summarizing this information. The average human brain has a tough time with numbers; we think more easily in pictures and stories. So graphics are important to help people understand the distribution of jobs and salaries.

Here's another approach I've developed for illustrating employment outcomes. You can do this with any word processor--or even using just paper and pencil. First construct a table like this one, with salary ranges running down the side and job categories across the top: 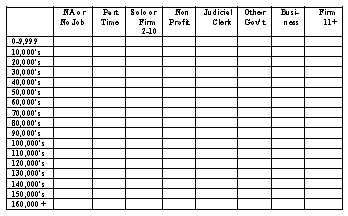 To fit this example into a blog entry, I combined all law firms with 11 or more lawyers into a single column. If you try this at home, you'll probably want separate columns for firms of different sizes (e.g., 11-25, 26-50). You can subdivide other categories as well: "Government" could become "State/Local Government" and "Federal Government." Some people like to divide "Non Profit" into "Public Interest" and "Academia." If a school has a lot of JD Advantage jobs in a particular category (like Business), you could create separate columns for "Business/JD Advantage" and "Business/Bar Admission Required." Experiment with different columns to see the pictures that emerge.

(Nerd note: "NA" in my first column means "not available." Following the lead of US News, I combined "unknown" graduates ("NA") with unemployed ones.)

Once you've set up a table, gather information about recent graduates from a school that interests you. This technique works best for law school faculty and staff, who have access to the most granular data about their own graduates, but I show below how you can approximate tables from public information about a school. Data in hand, put an asterisk in the appropriate box for each graduate.

Here is a table I approximated for Stanford's class of 2011. I picked Stanford as my first example because the school does an excellent job of collecting and publishing employment data. My approximation of outcomes thus should be fairly accurate: 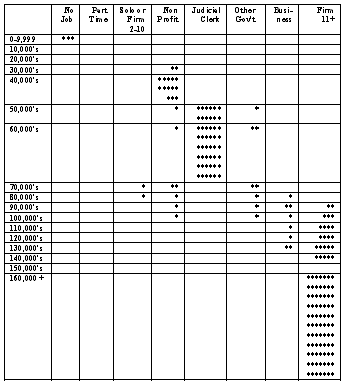 Why is this an approximation rather than a table with the same level of accuracy that someone inside Stanford could generate? Even though Stanford publishes extensive job and salary information on the web (which I used), it doesn't use the same salary ranges I've depicted here. I can tell from Stanford's published data, for example, that at least 77 members of the Class of 2011 had starting salaries of $160,000 or more. But there could have been more graduates above that line--perhaps as many as 100. In the interest of preserving Stanford's modesty, I opted for the low estimate of 77 graduates in the highest earning category. That may be low, but I don't think anyone underestimates Stanford's placement power. (If Stanford's administration does want to brag a bit more, with their full numbers, here's a much less modest approach pioneered by the University of Chicago.)

I didn't have any information about the salaries earned by Stanford graduates in very small firms or business; from the public data, I knew only that there were 2 grads in the first category and 8 in the second. How did I place my dots for those grads? I estimated their salaries using national data. Nationally, the 75th percentile for new lawyers in firms of 2-10 lawyers is $60,000, and the 95th percentile is $85,000. I figured Stanford's grads would fall near the top of the range, so I spotted one asterisk in the $70,000's and one in the $80,000's. Did I get those salaries exactly right? Almost certainly not. But social scientists estimate missing data all the time; I say a bit more about that below.

I used similar estimation techniques for other missing data. When Stanford lacked information about a few graduates in a job category, I used the median salary reported by other Stanford grads in that category. When I lacked any Stanford-specific information, I used national data biased toward the high end.

So the above table isn't an exact rendition of Stanford's outcomes, but it's a good approximation of outcomes for graduates of a very top law school like Stanford. I like this format because the reader can quickly grasp the overall story about this school's graduates: by far the largest cluster take jobs paying $160,000 or more at law firms; the next biggest cluster pursue judicial clerkships (and we can readily see the pay level for that work); some work for nonprofits, at salaries that show significant diversity but cluster below $50,000; none are working part-time during the year after graduation; and only three are unemployed.

The graduates of most schools, of course, face a very different pattern of outcomes. How does the table work for a different type of school--say one like the University of California at Davis? The dean of that school has had some trouble remembering his graduates' employment outcomes; here's a table approximation to help with that: 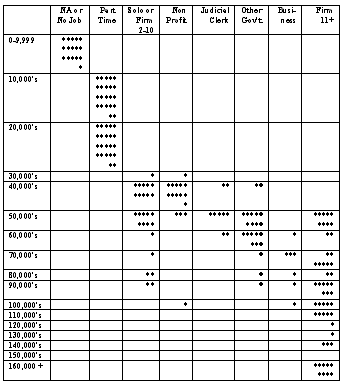 As you can see, this is a very different picture than the one for a school like Stanford. The single biggest clump of graduates is in the part-time category. Nine months after graduation, forty-four of Davis's graduates held only part-time jobs. I've rather generously estimated half of those jobs as paying $10,000-19,999 and another half as paying $20,000-29,999. (Reality check on part-time work: At $15/hour for 20 hours/week, a graduate would earn only $15,600 over a full 52 weeks--if the job lasted that long. Even at $25/hour, 20 hours/week for a full year grosses only $26,000.)

Of the full-time employed Davis graduates, 26 are working either solo or in firms of 2-10 lawyers. Davis reported salaries for 13 of those graduates, and I estimated the missing salaries using a technique like the one I described above for Stanford: depending on the number of missing salaries in a category, I used Davis's median or 25th percentile salary for the missing values in that category. Why did I vary this? If a lot of salaries are unreported, there's good reason to think that the reported salaries skew high; the 25th percentile may offer a better estimate for missing values under those circumstances. (Note, though, that for most job categories the 25th percentile and median salaries are very close; this choice doesn't make a lot of difference in the end.)

At the other end of the spectrum, Davis's published data (buttressed by a few estimates) show that about 26 graduates are earning $100,000 or more, mostly while working in law firms. One reason I like the dots-in-the-box approach is that I think it helps put those high salaries in perspective; the table underscores how many other students you'll have to beat out for one of the top jobs. It's one thing to tell prospective students, "just ten percent of our graduates earn more than $110,000." As we know, most 0Ls will simply imagine themselves in the top ten percent. It's a little more daunting to see graphically all of the other classmates you'll have to leapfrog for those high-paying positions.

What about a lower-ranked school and/or one that doesn't publish any salary information: Can the table graphic help us there? Barry Law School's director of admissions has also had some trouble with employment data, and the school discloses no salary data, so let's see what we can surmise about Barry. We do know that 79 members of the Class of 2011 (more than one-third of the total) were unemployed or status unknown, so they're easy to plug into the table. We also know that another 16 were working part-time; I gave them the same generous salary distribution I allowed to Davis. For the rest, I estimated salaries between the 5th and 25th percentiles nationally for that job category; if the salaries are higher, that seems to be Barry's burden to disclose. At best I think Barry's table looks like this: 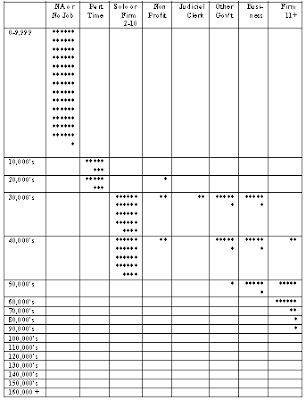 What story does this picture tell us? If you want to be unemployed, work part-time, or have a full-time job paying less than $50,000, Barry is your school! For full-time jobs paying $50,000 or more, you're going to have to finish ahead of a lot of other classmates. Those jobs, in my best case approximation, exist for only 10.5% of the class--and they're very unlikely to top $100,000.

Three schools, three stories. What's the story at your school? Why not get the data and graph it?