There was a lot of press last week about this year's dramatic fall in law school applicants. LawProf and I noted the carnage a few weeks ago: Law schools are about to hit a 30-year low in the number of applicants. The graph, if you haven't seen it, looks like this: 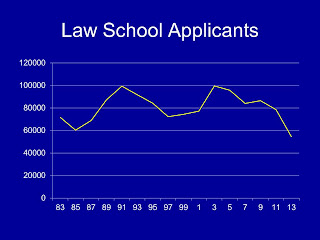 But even this graph doesn't convey the full extent of disenchantment with legal education. The line looks vaguely cyclical. If applicant numbers rose between 1985 and 1991, and again between 1997 and 2003, won't they rise again? Is this just a temporary down-turn? 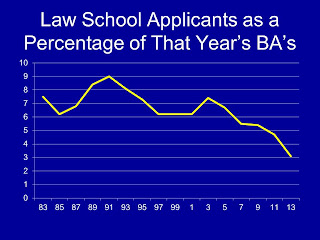 In 1991, the high point for law schools, about 1,100,000 people earned college degrees. The same year, 99,377 people applied to law school--a ratio of 9%. That doesn't mean that 9% of all college seniors applied to law school in 1991; each year's applicant pool includes older graduates along with college seniors. The ratio of applicants to contemporary college grads, however, is an excellent indicator of interest in law school.

Accounting for the growth in college graduates makes clear that law schools are not suffering a sudden or cyclical drop in applicants. Interest in our degree has fallen fairly steadily over the last twenty years. There was a small uptick of interest during the 2002 recession, but no increase at all during the Great Recession. At best, that more recent recession bought us a short pause in the decline. 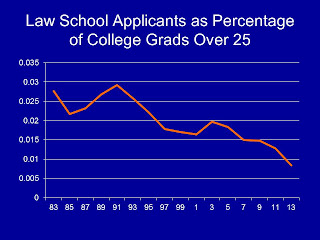 These graphs persuade me that the drop in law school applicants is not cyclical; it's not related to the recession and jobless recovery; it's not even based solely on the most recent contraction in the legal market. College graduates have been losing interest in law school--compared to other graduate programs or workplace opportunities--for the last twenty years.

What accounts for that decline? During those same two decades, law school tuition has risen extravagantly: 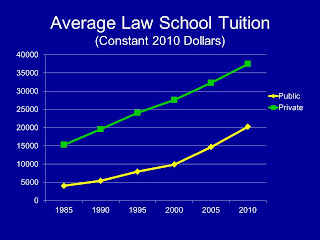 Even with student loans, we live in a market economy: When price rises, demand usually falls. Law schools thought their consumers were "price insensitive" and continued raising tuition. We didn't see that some students were price sensitive, and were turning away from our degree, because we were floating on a cushion of rising college graduation rates.

Now we've burned through the cushion. The steady decline has reached the point where we'll struggle to fill first-year seats. With poor placement rates, increased transparency about job outcomes, and ongoing shifts in legal practice, it will be very difficult for law schools to reverse this twenty-year trend. If we hope to do so, we have to look candidly at the roots of our long-term slide. One of those roots surely is the price of legal education. Rising cost, falling demand. Simple market economics.