Or you can turn the page.
From: Columbia Law School <annualgiving@law.columbia.edu>
Date: Wed, Feb 15, 2012 at 4:25 PM
Subject: Give a student the chance at a dream job
To:
With $85 a month, you can get eight movie tickets, seven buckets at the driving range, six manicures -- or you can give a Columbia Law School student the chance at a dream job through our Early Interview Program. 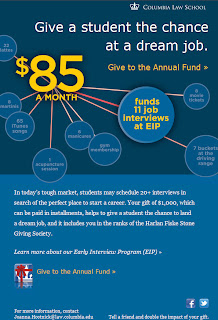 This missive was forwarded to me yesterday by a CLS alum who was not amused:

A school with Columbia's endowment and tuition levels can't pay for its own interviewing program?  This reads like one of those ads for sponsoring a starving third world child.  For just $85 a month, I can help a poor Columbia law student find a job!  I wonder if I will get personalized letters from"my" law students reporting on their lives to me.

Equally pathetic is the way in which this ad compares options:  I could buy martinis, manicures, or movie tickets--or I could support a Columbia law student's job quest!  If I had the graphic skills, I would photo shop this into a brochure from UNICEF or similar charity.  For $85/month, how many children could I feed, vaccinate against polio, treat for malaria, etc?

A few notes:
(1) Somebody gets paid a lot of money to come up with stuff like this.  For instance, Michigan Law School's development director earned a salary of $214,000 last year.
(2) The logic behind this appeal must be that enough CLS alums have picked up on the anxiety regarding the state of the legal hiring market that it's worth trying to tap into that anxiety when shaking the money tree (BTW Columbia's published employment and salary statistics are, in terms of transparency, pretty ludicrous, at least in the context of the emerging new normal, in which elite law schools are actually expected to cough up some useful information).
(3) The Early Interview Program is a gigantic four-day cattle call held at a midtown hotel in mid-August, at which hundreds of students do thousands of interviews with big law firms.  CLS also offers a more conventional OCI program at the school itself, running from mid-September to mid-November, but I get the impression from the school's web site that this pre-semester meet market is the "main" OCI event (CLS students or alums are encouraged to elaborate in comments).
(4)  My correspondent informs me that this program existed in the late 1970s, but at the time it was held at the law school, with some of the interviews being held in professors' offices.
(5) Moving this thing off campus -- I understand NYU does something similar --costs the school (aka its students) a huge pile.  Columbia has close to 1000 2Ls and 3Ls, and apparently it's common for people to do 15 or 20 interviews, or more, so the school must have to rent a good part of a midtown hotel for four days at the height of tourist season. And for what? So that midtown firms don't have to board the Nellie and head upriver to Morningside Heights? So that CLS professors -- most of whom are nowhere near the law school in mid-August -- don't have to open a few of their inner sanctums to contaminating incursions from the servants of Capital?
I suspect this is just another thing that elite law schools do because they have more money than they know what to do with -- although not so much that they don't have to be constantly hitting their alumni up for even more.
In and of itself it's a small thing. But in the bigger picture it's a perfect illustration of why the single most absurd aspect of contemporary American legal education is how administrators and faculty simply take it for granted that "a first-rate legal education is expensive." (For a devastating critique of this attitude see this). Yes indeed it is, especially when you're constantly blowing money on stuff whose only real practical function is to advertise how rich (excuse me, "elite") you really are.